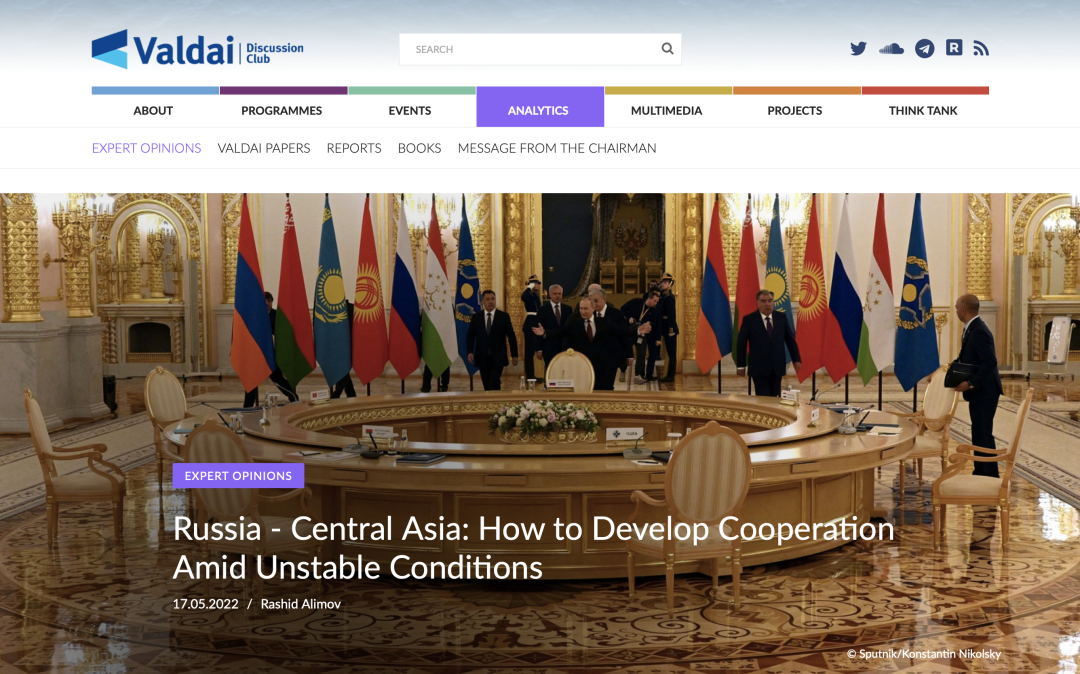 The events of August 2021 in Afghanistan have become an unprecedented test for Russia and the countries of Central Asia in their ability to respond to crises.

Preventive operational measures, taken at the bilateral level and within the CSTO and SCO framework, have made it possible to eliminate risks and reduce tension. However, security is not a result but a process that must be continuous. The arc of instability that has emerged along the entire perimeter of the Afghan border cannot be converted into a line of trust and cooperation at once. First, it is necessary to build a reliable “security belt,” the concept proposed by the President of the Republic of Tajikistan, Emomali Rahmon.

How to promote the return of peace to Afghanistan

History will impartially assess those who deliberately turned a blind eye to the unhindered use of the territory of Afghanistan by international terrorist groups. Over the course of twenty years, they turned this country into the world’s largest producer of heroin and led the Afghan people to a humanitarian crisis and extreme impoverishment. The UN estimates that the number of acutely hungry Afghans rose from 14 million to 24 million from July 2021 to March 2022; one in two are children. The tragedy of the Afghan people, if left alone with a humanitarian catastrophe, may result in new flows of refugees, an increase in the drug threat and a surge in terrorism. Amid these difficult times for the Afghans, Russia and the countries of Central Asia are providing them with humanitarian assistance; they wish to see Afghanistan peaceful, stable and prosperous.

Neither Russia nor Afghanistan’s neighbors are interested in a hotbed of instability in the “heart” of Eurasia and in security threats to neighboring countries coming from Afghan territory. At the same time, it is obvious that there is no universal approach to solving the problems accumulated over the past forty years. To gradually restore Afghanistan and return the country to a peaceful course of development, it is necessary to create an inclusive government with representatives of all ethnic and, most importantly, influential political groups of Afghan society. A chair will not stand on one leg for a long time. The recent large-scale offensive by the Afghan National Resistance Front, which has liberated three districts of Panjshir province from the Taliban, indicates that the opposition has not come to terms with the new government in Kabul and intends to continue the armed struggle.

Against the backdrop of the emergence of a hotbed of instability in Eastern Europe, the world community unfairly shifted its focus away from Afghanistan. At the same time, the security situation in the country is of deep concern. Various terrorist groups continue their activity on Afghan territory; the number of terrorist attacks is not decreasing, including foreign fighters who have mastered the technologies and methods of conducting terror in Iraq and Syria.

The deadly practice of terror will have its bloody continuation. This, among other things, is indicated by the fact that in the northeastern provinces of the country, in more than 40 training camps and centers, more than six thousand militants, drugged by the ideology of death, are being trained.

Some have been hatching plans for more than a year to transfer the “fire of war” from the Afghan hotbed of instability to the peaceful right bank of the Amu Darya: to neighboring Tajikistan, Uzbekistan and Turkmenistan. Clashes between radicals and members of the Islamic State in Afghanistan near the Afghan-Tajik border provide fresh evidence of their activity.

Terrorist groups settled in Afghanistan, whose ranks include many citizens of Russia and the Central Asian countries who have fallen into their ideological networks, have made skillful use of the political and socio-economic consequences of the pandemic and the religious factor. In this regard, it is essential to remain vigilant and united, anticipating the progressive and complex threat posed by terrorists. The events of January 2022 in Kazakhstan, which prompted an instant reaction from the CSTO member states,  as well as the May, 2022 detention by the special services of Kyrgyzstan of members of the extremist organisation Hizb ut-Tahrir, confirm the simple truth that only vigilance can ensure safety, even if there is no visible danger.

Strengthening cooperation within the framework of the CSTO and the SCO

It is in the interests of Russia and the countries of Central Asia to increase efforts in the fight against international terrorism and their close anti-terrorist partnership, both in a bilateral format and within the framework of regional organisations, primarily the CSTO and the SCO. The CSTO is a force that is capable of reliably protecting the sovereignty and territorial integrity of its member states in the face of increasing challenges and threats to security; the organization held a summit in Moscow on May 16, 2022.

It is important that in recent years the process of forming a multilateral framework to counter threats emanating from the territory of Afghanistan has been gaining momentum. The Joint Air Defence System of the Central Asian region is being strengthened, along with Russia, including Kazakhstan and Tajikistan. Hundreds of servicemen from the countries of Central Asia are trained in Russian military institutions. With the support of Russia, the CSTO is successfully implementing a program to modernize the member states’ armed forces. This year, another series of joint anti-terrorist military exercises is planned.

The unpredictability of the Afghan factor and other terrorist challenges, the presence in the region of “sleeping cells” of extremist forces and ongoing drug trafficking dictate the need to deepen cooperation between the CSTO and the SCO to prevent external security threats. It seems important to consolidate the Dushanbe (2021) experience of holding joint summits, anti-terrorist exercises, and regular consultations through the Secretaries of the Security Councils and special services of the CSTO and the SCO.

For both partner organizations, Central Asia is the “geographic core,” Their common concern is maintaining peace and stability in this region. The tightly tied Afghan knot must be unraveled, first of all, of course, by the Afghans themselves. The UN, neighboring states, interested countries and international organizations can only facilitate this process. For example, the SCO and the CSTO, in which Russia, Kazakhstan, Tajikistan, Kyrgyzstan, and Uzbekistan play an important role, could initiate the convening of a Conference on the Security and Development of Eurasia. The demand for such a multilateral dialogue platform has been brewing for a long time. In the context of the new geopolitical reality, holding the Conference on an annual basis could contribute to the joint search for solutions to urgent problems related to the region’s development, including issues of peace, stability and security, including economic cooperation.

The unprecedented sanctions pressure on Russia has demonstrated the vulnerability of most of the world’s economies, including the countries of Central Asia, and their dependence on the financial system that developed after the Second World War. History teaches that the sanctioned road invariably leads to a dead end, especially for those who use “symbolic signs”. There is no doubt that Russia will emerge from this situation stronger and even more economically powerful. The countries of Central Asia, closely intertwined with Russia, are also deeply interested in this outcome.

For the countries of Central Asia, Russia is a key trading partner and one of the largest investors. Over the past five years, Russia’s trade with the region’s countries has grown by 57%, rising from $23.6 billion in 2017 to $37 billion in 2021. according to independent sources, the volume of accumulated Russian investments in this region exceeds $30 billion, and the number of Russian companies participating has exceeded 10,000. Over 3,500 joint ventures involving Russian capital investments have been registered in Kazakhstan alone. The interest of Russian business circles, large and medium-sized businesses cooperating with the region, has never faded.

Amid unstable conditions, will it be possible to maintain or provide a new impetus to Russia’s trade and economic cooperation with the countries of Central Asia? The leading think tanks have downgraded their forecasts for the region’s economic development in 2022. For example, the European Bank for Reconstruction and Development lowered its forecast for economic growth in Central Asia by 1.5%. (In the Central Asian region, the GDP growth rate will be 3.2% instead of the previously forecasted 4.8%). At the same time, crises offer new windows of opportunity for collaboration. It is only important to find these “shining windows”, open them and continue to interact effectively with each other’s interests.

The trust-based nature of Russia’s cooperation with the region’s countries, tested by time, provides sufficient grounds for strengthening and developing established trade and economic ties.

First, Russia and the countries of Central Asia are connected by their alliance-like strategic partnership;

Second, over thirty years of diplomatic relations, they have formed a solid legal and regulatory framework consisting of almost a thousand bilateral treaties and intergovernmental agreements, over 70% of which relate to the economy;

Third, ties between regions are characterized by a high level of stability: 76 constituent entities of the Russian Federation are developing dynamic ties with Kazakhstan, with Kyrgyzstan – 71, with Tajikistan – 80, Turkmenistan – 60, and with Uzbekistan – 75;

Fourth, from year to year, industrial cooperation between Russian enterprises and the countries of the region is being strengthened;

Fifth, interest in the Russian labor market remains high on the part of citizens of the Central Asian countries, which, according to experts, create about 10% of Russia’s GDP;

Sixth, the share of the Russian ruble in payments for the supply of goods and the provision of services under foreign trade agreements is growing. Depending on the country, this indicator at the end of 2021 ranged from 64% to 73%, which confirms the possibility of a smooth transition to 100% use of the ruble in mutual settlements;

Seventh, the training of specialists from the countries of Central Asia in Russian universities is expanding. In the 2021-2022 academic year, their number approached 175,000, while the total number of foreign students in Russia was 324,000. With the assistance of the Ministry of Education and Science of Russia, branches of leading Russian universities have been established in the Central Asian region. Over 115 universities and institutes in Russia and the region are involved in inter-university cooperation.

In addition, the countries of Central Asia have rich natural resources, significant production and mineral resources potential, unique raw agricultural materials, developed roads, and other infrastructure. In terms of reserves of some types of natural minerals, infrequent earth, and non-ferrous metals, the countries of Central Asia are among the top five world leaders.

All this provides an excellent framework for elevating trade and economic cooperation to a qualitatively new level, especially regarding industry and high-tech production, agriculture and engineering, aviation, and energy, including nuclear energy. Tourism also has untapped potential for cooperation: the industry has undergone tremendous changes in the countries of Central Asia in recent years. An extensive modern hotel infrastructure has been created, and significant efforts have been made to preserve historic architecture and create comfortable recreation areas for travelers, including ecotourists.

Expanding the horizons of cooperation

Russia and the countries of Central Asia have built and continue to build their relations as privileged partners since the very beginning. It is important that real-time “clock checking” occurs at the bilateral and highest levels, and within the framework of regional organizations – the CIS, the CSTO, and the SCO. The “Russia plus Central Asia” format has shown to be very popular and promising. The potential of this format, amid new realities, could be even greater if it was utilized by sectoral ministries and departments, primarily by the economic bloc.