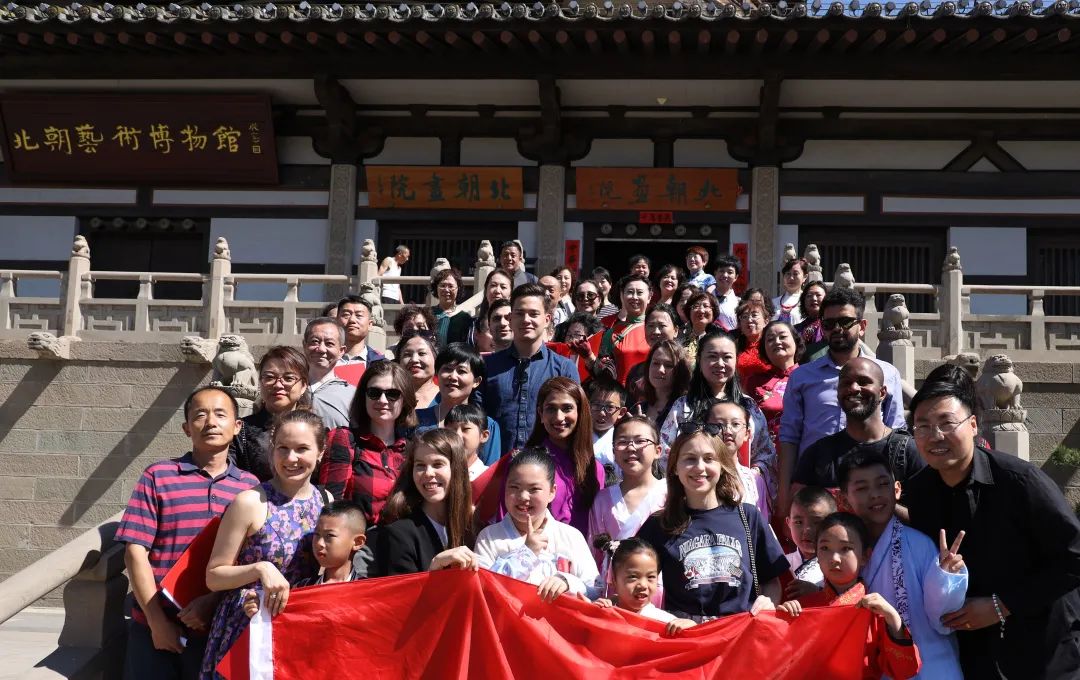 On 29-30 May 2021, SCOLAR Network organized a youth delegation to Datong city of Shanxi province, invited by Datong Government and Shanxi China Radio International. The delegation, coming from 12 countries included SCOLAR members, bloggers and entrepreneurs.
Datong city, located in Shanxi province, was named “China’s capital of coal” and “Phoenix city”. In recent years, the city started efforts on rebranding itself as a tourist location, focusing on restoring and preserving its ancient heritage.
Upon arrival, delegates visited the city wall at night, continuing to explore the ancient city on the second day by visiting Mingtang park, Yongtai Square, Dynasty Palace, and the famous Yungang Grottoes. The Datong side welcomed the delegation and arranged joint activities with the local population.
Yungang Grottoes, a pearl among China’s ancient Buddha caves, were the final destination for the program. Located at the southern foot of Wuchou Mountain, 16 km west of Datong city, and covering an area of 1,000 square meters, they represent a fusion of visual traditions from China, South and Central Asia. The delegates explored some of the 252 beautifully adorned caves and 51 thousand statues which date back to 5th and 6th centuries A.D.
In the evening delegates attended a youth conference, where six delegates delivered their interventions.
Artem Zhdanov, co-founder of EKD and LaowaiMe, emphasized in his speech three main points of Datong: ancient culture, newly built infrastructure, and green environment. He also mentioned that Datong city was reborn like a phoenix by bringing back its ancient roots, culture, and heritage.
Olesya Dovgalyuk, project lead of SCOLAR Academy, spoke about the importance of connecting the young people in the SCO region through education. Expressing gratitude to the organizers on behalf of SCOLAR, she noted that for foreigners coming to China it takes years of patience, commitment, and humility to learn about the country. For her, Yenching Academy of Peking University was a benchmark experience that opened a window into the importance of cross-cultural communication between China and the outside world. Later at SCOLAR she saw the development potential lying in cooperation between the countries of Shanghai Cooperation Organization, key to which lies in the education opportunities available to these countries’ youth.
Director at Ballistic Architecture Machine and Schwarzman Scholars 19, Kseniya Otmakhova talked about “New Silk Road Initiatives”, pointing at China’s 2060 carbon neutrality goals and leadership in smart city development, and contemplating Datong city’s transition to using hydrogen and environmental restoration as an smart choice for a future location of economic development zone.

Zoon Ahmed Khan, Research fellow at Belt and Road Strategy Institute of Tsinghua University, started by noting a deep relationship between China and Pakistan. She mentioned how CPEC has boosted the cooperation between these two countries based on constant dialogue. She continued by praising Datong city for attaching importance to the cultural industry and introducing its heritage and culture to the world. She further added, “as part of the SCO, an organization committed to revitalizing historically significant bonds, we realize the importance of culture”, which is why cultural and youth exchanges will play a significant role in our future projects.

Kaha Gogiashvili, Director at Startup Grind Beijing, spoke about “Community Lead and International BD at Innovation”. He shared his experience as an active member and volunteer of Startup Grind, which is the world’s largest community of startups, innovators and creators. He believes that only when people from different backgrounds, cultures, and experiences come together – something truly great and unique can be built

Jonathan Lopez Naranjo, a Schwarzman Scholar ‘19, shared his personal story in China with the Broader view for Latin America. Born in Medellin, Colombia, Jonathan talked about Colombian entrepreneurs, resourceful in their ways and retaining a strong inclination to serve and help others. After being in China for one year and seeing the country’s future-looking development trajectory, Jonathan added, he decided to contribute to building connections between the country and Colombia and wider Latin America. He concluded by saying “My mission is to continue learning from and growing in China to further promote excellent relations between China and Colombia”.

After the speeches by the delegates and the invited professors from institutions in Datong and elsewhere in China, the ceremony was concluded with a traditional performance by the Datong dancers.

This deep dive opened Datong city to the delegates from another angle – as a somewhat-forgotten ancient capital of the Northern Wei dynasty which keeps its traditions, cherishes the benefits of multicultural exchanges, and is ready to extend hospitality to everyone coming.